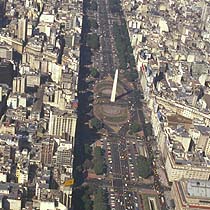 The inability of the Argentine government to live within its means is not surprising, however.  Argentina is a country known for poltical and economic corruption.  Government payments help support corruption, and many Argentines organize their economic affairs to illegally avoid paying taxes, sometimes justifying their actions as reducing the support for a corrupt system.

Some may argue that the Argentines have squandered opportunities and are getting what they deserve because they are a nation of corrupt people who repeatedly elect corrupt governments that continue to make Argentina an international basket case.  But, these arguments dispassionately dimiss the resulting suffering as being the deserved consequence of human actions.  They also for granted a particular answer to the old question, "Which came first, the chicken or the egg?"

Survival in a country that is rife with corruption requires that citizens develop skills that work well within a corrupt system.  If police are not paid enough, they will take bribes and work scams.  Once individual citizens develop the skills to survive in a corrupt system, however, they will resist its change.  Changing the system threatens their survival because it obviates the skills they have developed to work the system.  Individuals may recognize that the end of corruption will improve things for their grandchildren's generation, if the individuals and their children are able to survive.

Individuals are also likely to recognize their own individual actions to end corrupt behavior will not eliminate a corrupt system.  A person who fails to act corruptly in a corrupt system is simply reduced to poverty.  The sum total of individual corrupt actions poses a dilemma for a society.  Each person in the society would be better off if all members of the society no longer acted corruptly.  Nonetheless, each member of the society has plenty of reason to distrust and disrepect his fellow citizens and recognizes that corrupt behavior will serve himself well whether or not the society is corrupt.

Some might it convenient to compare Argentina to a drug addict who refuses to quit and is unwilling to accept the consequences of his actions.  But a country that is in the throes of corruption is not exactly like a drug addict.  It is more like a group of drug addicts, none of whom are not allowed to quit using drugs unless they all quit at once.  To fully quit, individuals are forced to leave the country or accept a certain amount of poverty for themselves and their children.

In such a situation, it is easy to see the appeal of a "caudillo," a strong man who can be a national savior.  The people are looking for someone who can deliver them from the collective madness of a system that does not serve them, yet from which they are unable to quit individually.  A caudillo would be the answer to their collective prayer to God...

In my opinion, the Argentine national character is better expressed in tango—a music and dance that is rich and deep its cultural heritage and allows individual expression from the mind, heart and soul...  The communication that is possible in this dance tells no lies...  As Nito Garcia once said, "Bailas como sos."  (You dance who you are.)