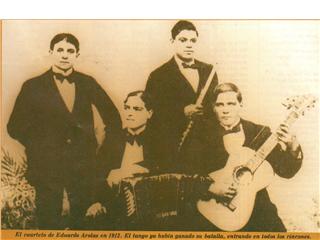 Tango began originally as a dance, with sensual choreographies and very simple music. It came from the lowest social classes, and in the beginning it was only danced by men. As the choreography and lyrics started to change, tango began to spread to all the other social classes.

The first tango orchestras were trios, usually with a harp, flute and violin.  Sometimes a trio might substitute or expand to include other instruments such as a bandoneon, a concertina, a mandolin, or a harmonica. The musicians played intuitively without formal academic training.  Tangos were frequently improvised from very simple tunes.  The players had rudimentary technique, and the lyrics were superficial.

In time, the guitar (brought to Argentina by the Spanish) replaced the harp and was used to give rhythm to the tango. The dance drew on the "bordoneos" (strummed rhythms) from the guitar, "fiorituras" (flowery embellishments) from the flute, and the "pizzicatos" (staccato plucked notes) from the violin.  With these elements, tango had what was regarded as naughty sound, which invited the dancers to be sensual.

Among the recorded dance venues were Tambito, El Velódromo, El Kioskito and Lo de Hansen.  The regulars at these venues were the "compadritos" (street ruffians) and members of the porteño (Buenos Aires) aristocracy.

The piano was long used as a solo instrument in "peringundines" (brothels) and dance houses.  The instrument didn't have a place in early tango trios because its substantial weight made it difficult to move from place to place.

The piano introduced tango to the highest social classes, but it was Roberto Firpo who introduced the piano into tango orchestras.  A trio formed by Roberto Firpo (piano), Alcides Palavecino (violin) and Juan Carlos  Bazan (clarinet) created a radical change in tango instrumentation when it substituted piano for guitar.  Peforming at El Velódromo and later at El Tambito the trio initiated the era of "piano criollo tangos." Other great pianists of the era include Pancho Nicolini, Camilín, Araujo, Manuel Campoamor, Bevilacqua and Rosendo Mendizábal.

The early tangos began to be written down, and that encouraged their widespread dissemination.  Among the oldest written tangos are "El Esquinazo," "El Porteñito," "El Choclo," and "Yunta Brava" by  Angel Villoldo; "La Cara de la Luna" by Manuel Campoamor; "Z Club" and "El Entrerriano" by Rosendo Mendizábal; "Unión Cívica" by Santa Cruz; "Don Juan" by Ernesto Ponzio; and "La Morocha" and "Felicia" by Enrique Saborido.

Over time, the bandoneon (which has become the most characteristic instrument of the tango) supplanted the flute.  For a while, the flute and bandoneon stood side by side, but gradually the flute disappeared.  The change in instrumentation brought another radical change to tango, giving it a more sentimental and less flowery style.  Among the great early bandoneonists were Arturo Berstein, Vicente Greco, Juan Maglio Pacho, Augusto Pedro Berto, Genaro Expósito and Eduardo Arolas.

Once the bandoneon had replaced the flute and the piano had replaced the guitar, the basis for the orquesta tipica (typical orchestra) was established.  Among the great pianists in these early orquestas tipicas were Agustín Bardi, Enrique Saborido and José Martínez. Many guitarists, such as Domingo Greco, Samuel Castriota, Luciano Ríos and Luis Bertein switched to piano or continued to play both guitar and piano.

The limited technical skills of the early musicians prevented a meaningful diversity of styles and interpretations.  As the tango and its players advanced, the primitive rhythmic division of 2x4 beat gave way to the more sophisticated 4x8 beat.  Shaped by the bandoneon, the music slowed in tempo and became smoother.  The lyrics began to tell a story.

The composers—such as Firpo, Carlos Posadas, Arturo De Bassi, Eduardo Arolas, Vicente Greco, Agustín Bardi and Francisco Canaro—began to create tangos more suitable for dancing.  Differences could be found in the compositions, but the playing remained similar.  Differences in style did not appear until years later.

*María Laura Diamante was born in Argentina.  She is a tango pianist and researcher, as well as a journalist.  She contributes to several national and international tango and feminist magazines.  She studied literature at the University of Buenos Aires.  She has authored two books: Poemas Ignotos and Espiando en la Naturaleza, the latter which contains stories and songs for children.

Rosana Ghirardi was born in Argentina.  She is an English language teacher and translator.  She has worked as a translator for several national and international tango and feminist magazines.